Five Facts About Brain Health That May Surprise You

A younger brain isn’t necessarily a better brain – learn why.

While dementia is a devastating disease, there are reasons for hope. For one, cognitive decline isn’t inevitable. And there are things you can do to reduce your risk of developing dementia, prevent the disease, and even reverse its progression.

At Hebrew SeniorLife’s Deanna and Sidney Wolk Center for Memory Health, we are committed to educating our patients and their families about Alzheimer’s disease, dementia, and other brain conditions. Here are some of the facts that people are often surprised to hear:

An older brain is an advantage

There are many aspects to cognitive function. Yes, as you age, your brain’s processing speed may become slower – one reason why you might take a little longer to come up with the word you’re looking for. You may also have a harder time multitasking.

However, when you’re older, you’ve likely accumulated more vocabulary than a younger person. You can also look at the “bigger picture” much more easily. Overall, people can and should retain a stable level of cognitive abilities.

When we’re older, we form longer connections between cells in the brain, allowing us to relate things that might seem very different and connect them with memories of people and places. So, where a toddler might see a curved yellow object and think “banana = snack,” an older person might see that same object, recognize it as a banana, and remember the taste and smell of their mother’s banana bread. An older person’s brain has formed the connections to make memories and higher levels of thinking possible. This is why in many ways, our brains actually get better with age.

Watch a video of Wolk Center for Memory Health Medical Director Dr. Alvaro Pascual-Leone describe why the brain changes associated with aging are a good thing:

Cognitive decline is not a normal part of normal aging

You’ve probably seen dire statistics that as people age, there is a much higher likelihood of getting dementia. People always associate the aging process with declines in cognitive abilities but the truth is that cognitive decline is not inevitable.

According to the book Brain Aging: Models, Methods, and Mechanisms, some older adults retain excellent cognitive function well into their 70s and 80s and perform as well as or even better than younger adults.

There’s also a difference between forgetfulness and cognitive decline or dementia. Sure, you may have forgotten where you put your keys, but once you find them, your brain knows what the keys are for and how to drive to the grocery store.

If an older person is showing signs of cognitive decline, it’s also important to know that there are many reversible conditions that could be causing difficulty with memory and functioning. Medications, infections, an underactive thyroid, and vitamin deficiencies are just a few of the conditions that can mimic signs of dementia. That’s why it’s important to see a doctor if you’re concerned about yourself or a loved one.

You don’t have to have dementia with Alzheimer’s disease

Nowadays, people are more familiar with the differences between Alzheimer’s disease and dementia.

Alzheimer’s is a specific disease, while dementia is the manifestation of an underlying condition.
Alzheimer’s is just one of many conditions that can cause dementia, including Parkinson’s disease, Lewy body disease, and more. In dementia, the decline in memory, orientation to time and place, judgement, language, and motor and spatial skills are so severe that the person’s day-to-day life is impacted.

Two studies of aging, The Nun Study and The Adult Changes in Thought Study, showed that there are patients whose brains show the pathology of Alzheimer’s disease, but the disease never led to being disabled by dementia or even showing any symptoms.

One theory is the compensatory mechanism called “cognitive reserve,” which is how flexible and resilient your brain is and how it copes with damage. The brains of people with Alzheimer’s show abnormal levels of the sticky protein beta-amyloid, which forms plaques that disrupt communications between neurons. A person with a large amount of cognitive reserve could build back-up circuitry in the brain, rerouting around the “traffic jams” caused by plaque buildups. In this case, with the same amount of amyloid, they would show much less cognitive decline.

This is an area that Hebrew SeniorLife’s Hinda and Arthur Marcus Institute for Aging Research is investigating. If we can find ways to help people with Alzheimer’s form new networks in their brains, we can prevent or even reverse dementia.

Many of us have heard the “use it or lose it” theory about preventing cognitive decline and engage ourselves in activities such as brain games or word puzzles to keep our brain busy. But few are familiar with the notion that challenging yourself mentally or physically is what really makes the difference for the brain’s plasticity.

Plasticity refers to the way the brain adapts and changes based on experiences. Learning a new language, a new dance move, or working hard at things outside of your comfort zone all allow new wires to form in the brain. The mindfulness, concentration, and sense of purpose achieved during these activities truly strengthen the learning and memory functions of the brain.

That’s why as we age, setting and achieving meaningful goals is important for more than just our sense of self-fulfillment and happiness. It helps our brain adapt and extends our memory health as we get older.

Lifestyle modifications can meaningfully reduce your risk of dementia

One reason that cognitive decline isn’t inevitable as you age? There are lifestyle factors within your control that change your risk of developing dementia. According to the CDC, up to 40% of dementia cases may be prevented or delayed.

Genetics and aging are two risk factors for dementia that you can’t change. Others that you can work to reduce or manage include:

In addition to physical health, there are aspects of our emotional health that also impact our risk of dementia. For example, researchers have found that social isolation is associated with a roughly 50% increased risk of dementia.

Here are some of the ways you can reduce your risk of dementia:

Of course, it’s virtually impossible to live a “perfect” lifestyle – after all, we’re only human. It’s never too early or too late to make changes, and it’s vital to seek the right coaching and support. At the Wolk Center for Memory Health, we can evaluate your personal risk factors for dementia, make recommendations for lifestyle changes, and support you through your journey.

Concerned about signs of memory loss? We’re here to help.

At the Deanna and Sidney Wolk Center for Memory Health in Boston, we offer care for those who are concerned about possible memory loss, for seniors with Alzheimer’s disease and other forms of dementia, and for family members caring for a loved one with memory loss. We specialize in prevention of cognitive decline, early diagnosis, specific subtype diagnosis, ongoing care for managing dementia, and more.

If you’d like to schedule an in-person or telehealth visit for a memory assessment, treatment, or family support at the Wolk Center for Memory Health, we’d love to hear from you. Call us at 617-363-8600, or contact us online. 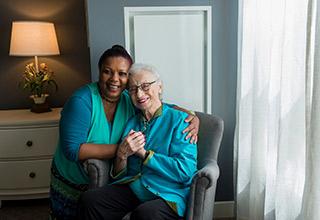 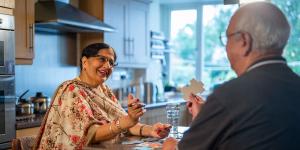 Training an Unpaid Army of Alzheimer’s and Dementia Caregivers

Dementia and Alzheimer’s care often begins at home with family members assuming the responsibility of caring for their loved ones. 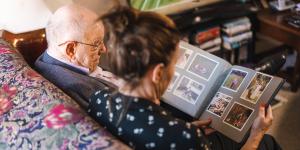 Beyond Words: More Ways to Communicate with Someone with Dementia

By using all five senses, we can create a sensory experience to engage with someone with dementia. 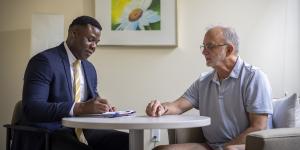 What is a Neuropsychological Evaluation?

Learn why a neuropsychological exam is recommended, how testing is done, and what you’ll learn from the results. 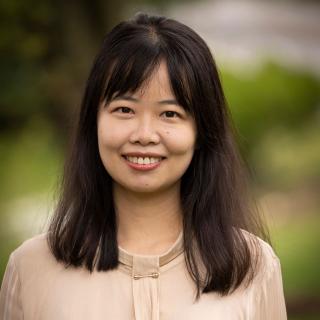 The Deanna and Sidney Wolk Center for Memory Health

Lingda Hou joined Hebrew SeniorLife in 2015 after graduating from Brandeis University with a M.A. in Economics and Finance. Prior to joining the Deanna and Sidney Wolk Center for Memory Health as their administrative clinic manager, Lingda worked at NewBridge...