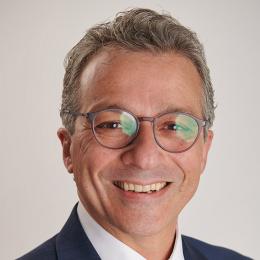 Alvaro Pascual-Leone, MD, PhD, is Medical Director of the Deanna and Sidney Wolk Center for Memory Health and a Senior Scientist at the Hinda and Arthur Marcus Institute for Aging Research at Hebrew SeniorLife, and a Professor of Neurology at Harvard Medical School.

Dr. Pascual–Leone is an international leader in the study and modulation of human cortical plasticity and a pioneer in the use of noninvasive brain stimulation and its application for the study of brain behavior relations and the development of diagnostic and therapeutic interventions in neuropsychiatry. An overarching goal has been the development of translational approaches to characterize and modulate brain activity to help patients with debilitating neuropsychiatric disorders while gaining fundamental insights into human brain function.

At Hebrew SeniorLife, Dr. Pascual-Leone also sees patients as a cognitive neurologist and the medical director at the Wolk Center for Memory Health, where the focus is on comprehensive, patient-centered, personalized care and multi-disciplinary, holistic support of individuals with cognitive decline, their families, and caregivers.

Previously, Dr. Pascual-Leone founded and directed for over 20 years the Berenson-Allen Center for Non-Invasive Brain Stimulation, and served as Chief of the Division of Cognitive Neurology at Beth Israel Deaconess Medical Center and as the Associate Dean of Clinical and Translational Research and Program Director of Harvard Catalyst at Harvard Medical School.

Dr. Pascual-Leone has authored over 750 scientific papers and several books and is listed as an inventor on several patents. His work is highly regarded for its innovation and quality and is highly cited (h-index 165; i10-index 626). Dr. Pascual-Leone has been recognized by Thomson Reuters as a one of the world’s top 15 neuroscientists and one of the "World's Most Influential Scientific Minds." In 2022 Research.com, a prominent academic platform for scientists, ranked him #10 in worldwide in neuroscience. He has been honored with many international awards, and is an elected member of the Spanish Royal Academy of Science (Pharmacy). His work has also gained wide general public appeal and outreach through dissemination in the lay press, television and radio, and several books (e.g. Norman Doidge’s The Brain That Changes Itself; and John E. Robison’s Switched On). Most recently Dr. Pascual-Leone co-authored, with A. Fernandez and D. Bartres-Faz, El Cerebro que Cura (2019).

Understanding the Connection Between Frailty and Dementia

Why it’s important to look at the whole patient when diagnosing memory loss or dementia due to Alzheimer’s Disease and other causes.

Why Do People With Dementia Wander?

Tips to manage wandering and keep your loved one safe.

Caring for Someone with Dementia During the Coronavirus Pandemic